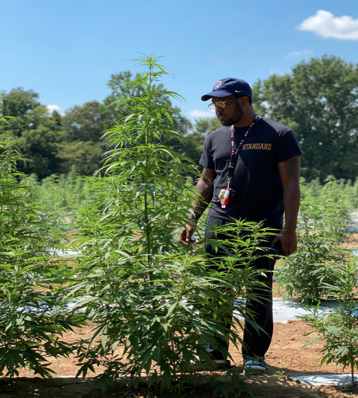 Agriculture Stands Steadfast as an Industry of Promise, with Hemp as The Front Runner

In the midst of this whirring digital age, agriculture stands steadfast as an industry of promise, with hemp as the front runner. Black farmers are present in the statistical shadows of United States agriculture with the ghosts of their ancestral fights in tow. There is such an overwhelming will to persevere, we often wonder if there will ever be an opportunity for folks to enjoy their dreams, and their land, lest they be robbed of it by violence or loophole. Hemp is a way black farmers can see those dreams realized and continued. This is one way black communities become revitalized and take collective steps forward to wealth equity.

I had the pleasure of speaking with the one such black owned hemp company, Gold Standard Farms of Martin, Tennessee. The interview went as smoothly as a good blunt in an air conditioned car on a hot afternoon. Incidentally, in the waning heat of early September, I ducked into my car to hold our phone interview. My client, Jarrel Howard, CEO and legacy forerunner, met me on the other end and began to share such rich history and wisdom.

The following retelling is a compilation of musings, historical facts and family magic fashioned as a story that I hope will inspire the next black hemp entrepreneur as much as it inspired me.

Polk Family Farms was established in 1941 by Fred and Eller Wease Polk. It spreads bountifully across 41 acres in Martin, Tennessee, boasting a variety of different crops over the last 80 years. From apples and cotton to corn and greens, and now hemp! Though it  goes by a new name, the farm retains its rich heritage. Guided by his family’s wisdom and determination, Jarrel is both the protector and purveyor of a wealth that is intrinsically worth much more than gold.

Jarrel talks spiritedly about his roots, from the intriguing farm find his great father happened upon while unwrapping meat, to the clever strategies that were put in place to protect the land. Fred Polk paid on the bill for his land for over 10 years by sharecropping. He nearly lost the opportunity, but finally made the last $100 payment to the widowed owner before moving his family across the street from their land in the dead of winter. Only one generation removed from the horrors of slavery, the Polks were now 1st generation land owners. 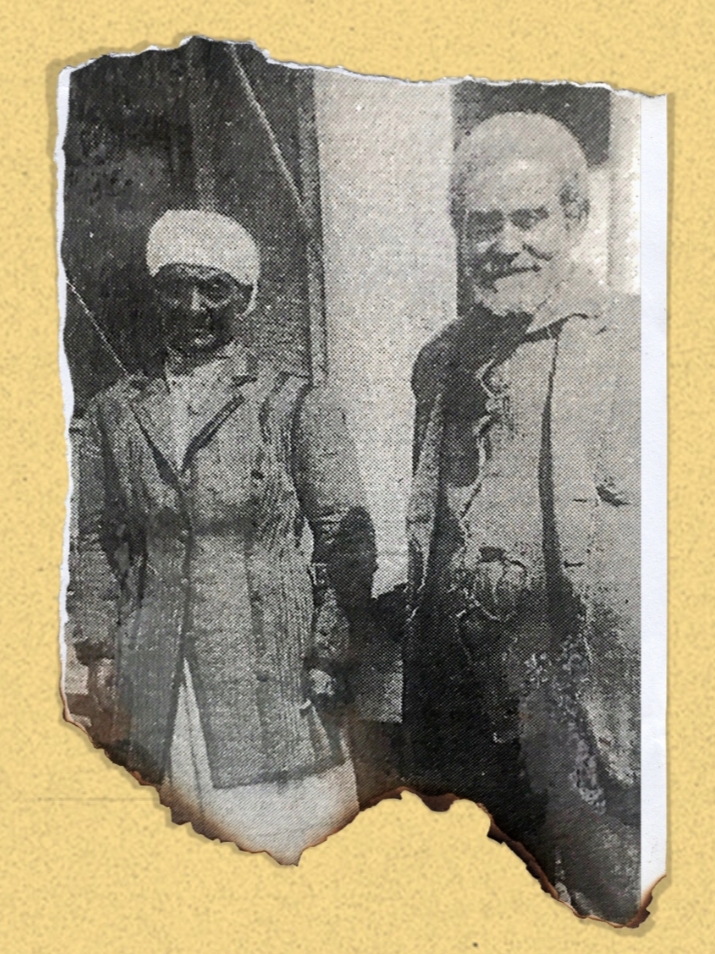 Gold Standard Golden Nug- The lineage of Polk family can be traced back to 1812 Delta Greenwood, MS

The family raised and fed themselves and countless others off of the crops from their land. “The only thing they had to purchase was flour!” Jarrel exclaims, reinforcing the element of self sufficiency that his family lives by until this day. He went on to share that Polk Family Farms at one point provided 20% of their farm produce to the community. His great grandmother also served lunch for the students of the school for the black children in Martin. The family philosophy extended to mean self-sufficient community, and this sentiment is still defined with Gold Standard Farms and their future endeavors. 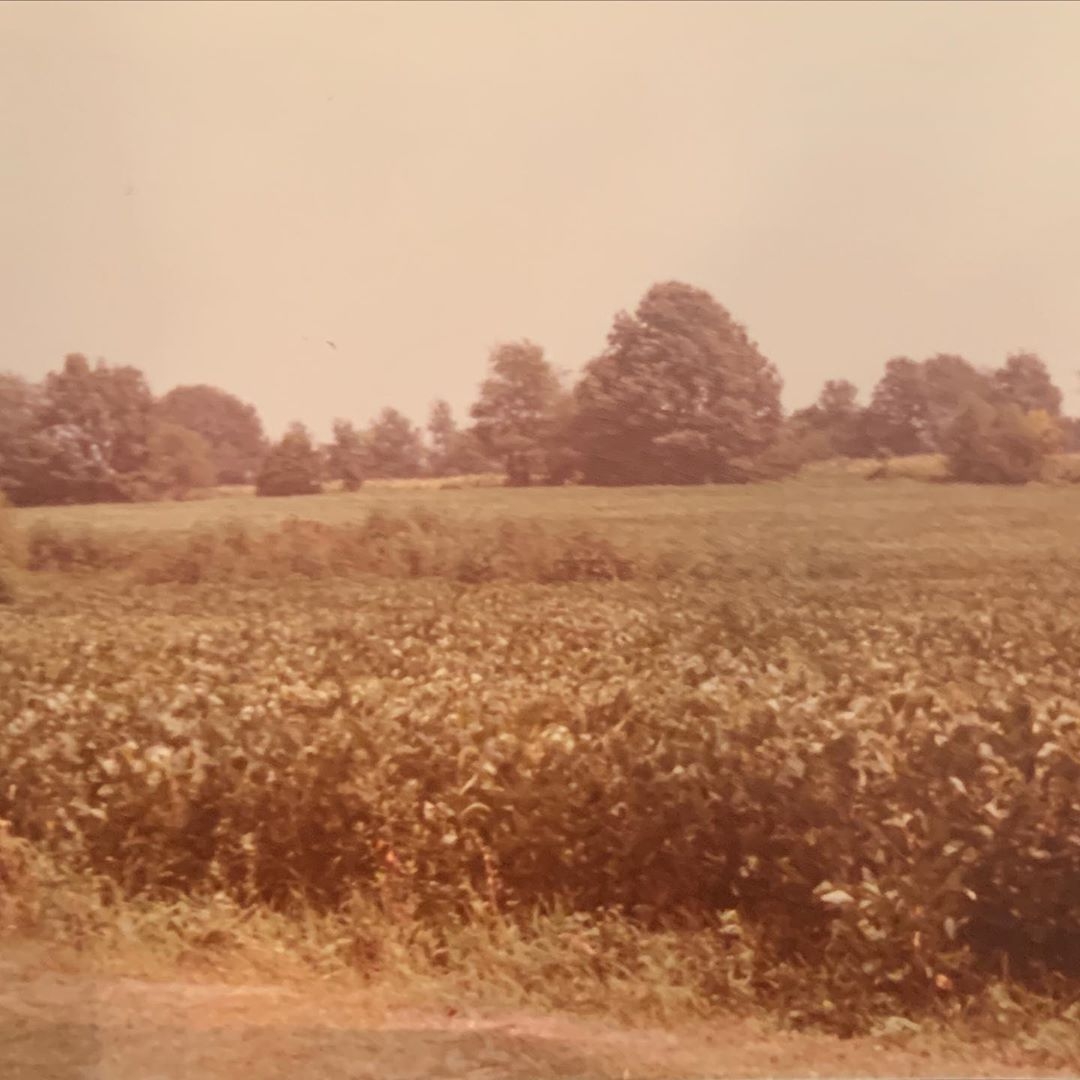 Jarrel was raised on the farm by his grandmother, with his extended family. He grew up observing the differences between the life he lived and the one his classmates lived, in the projects of rural, racially tense Tennessee. He later accounts how blessed he was to live and learn on the farm, as it afforded him a different perspective on how to work and change not only his life, but the lives of his family and community.

Already concerned with the future of family business, at just 16 years old Jarrel began looking at the books for the farm, trying to decide how he would contribute to bringing more to the legacy. The future of black farmers in general, had been in jeopardy since the inception of the practice. Crop pricing and net worth disparities were prevalent. He considered college and what he might study that could help get him where he needed to be. Jarrel’s grandmother and aunties encouraged him to look into fields other than agriculture.

“You were born on a farm,” he recounts them saying, “Why would we send you to school to learn farming.”

A business degree and later business pursuits for Polk Family Farms, sent Jarrel to Northern California, where a chance encounter with a yoga teacher and cannabis broker helped peak his interest in hemp. The experience is likened to Mansa Musa’s trip to Mecca; a trip on which Musa both shared and gained much more than any one could imagine. Jarre began to compare the prices between soybean crops and hemp crops. Though the money was easy to follow, the biggest job would be to convince the family. He spent a great deal of time, 2 years in research and development, and a substantial amount of money to prepare. The economic status quo of this humble black farm in Tennessee could be rejuvenated with the help of hemp plants, so the investment was worth it.

In true fashion of a counsel of elders, Jarrel paints a verbal picture of sitting with his 95 year old grandmother and 98 year old aunty on Mothers’ Day in 2018. The sovereignty of this moment, though not photographed, is felt with his words as he describes asking permission to extend the family business. No entitlement, no greed, only cooperation and honor. With that matriarchal blessing, the entire family took 3 months to become educated on hemp and then collectively, Polk Family Farms became Gold Standard Farms.

“We made it almost 100 years without getting tricked out [of] or run off our land.”

Like many black farms in the United States, Polk Family Farm was in danger of being usurped by local government, or slick landowners picking on lone members of the family. Jarrel recalls the stories his grandmother and aunts would share, one in particular about how white landowners came to the door in 1963 offering Mr. Polk a backhanded land deal that would trick the family out of the acreage they worked to massed over the years. The offer was met with a dignified, “Why would I buy your land when it doesn’t even amount to half of what I already have?”

To better avoid issues like this in the future, the family settled on a golden rule: The sale of any land must be unanimous, and the sale must be to someone in the bloodline, and must be contracted legally.

This type of bylaw would protect the farm against any legal loopholes like the ones used in the Torrens Act, heirs property dealings or partition sales to gain ownership of land up from under unsuspecting black farmers.

Gold Standard Farms is the extended vision of Polk Family Farms, so of course the community surrounding it stands to gain as much from the newest growers of hemp as the farm itself. In so many words, Jarrel states that GSF is committed to providing “advantages for people of color and helping to propel dreams in agriculture”. The company produces quality crops, but also plans to share the seeds of success with the next generations by piggybacking off of education and community, just as Jarrel’s family did for him.

Though the educational seed is still being nurtured at Gold Standard Farms, the plans are lined with promise to help the legacy and community grow tremendously. Jarrel spells out a need to reach the next generation as a means of helping that seed grow. More information will follow as things takes root.

Another seed of the Gold Standard Farms vision is Gold Standard Industrial. The 2021 project will invest in hemp-crete for affordable community housing. Hemp is one of the most versatile and essential crops in the world, with the ability to clothe, feed, medicate and house those that utilize it fully. By maximizing the full potential of hemp and the natural resources of the land, new streams of wealth are created.

For extension and business growth in the near future, Gold Standard Farms is considering converting three of the 4-bedroom homes on the property to house families of black owned companies looking to learn and expand in the hemp industry. 2 acres of land would be leased out as a direct sourcing opportunity. Companies would learn, first hand about cultivating hemp crops, and transitioning from being buyers to being growers!

Gold Standard Farms believes in allowing people to touch the soil. Much like Mansa Musa disrupted the price of gold for over a decade after distributing it freely along on his trip to Mecca, this type of distribution of wealth could help overturn the economic infrastructure that has placed black hemp companies and black farmers at the bottom of the pot.

“Instead of asking, we are CREATING… PLANTING opportunity— [creating] self sufficiency…”

*Gold Standard Golden Nug- Your 20’s are for learning, 30’s are for earning, and

40’s are for returning to the community

Gold Standard Farms offers premium boutique hemp flower, plowed by 1 mule, nurtured with hands and feet. The sweat equity poured into the early days of Polk Family Farm, is the same applied today. In fact, many of the services GSF needs for business are completed in-house, or in-network. From the wood business card to the branding and marketing. The point is to keep the dollar circulation in the black community for longer than 6 hours and create partnerships.

“You know why I like partnerships,” Jarrel asks during our interview, “Because you can extend your reach without extending your payroll!” Self sufficiency and community come to mind again, as he lists the other services that will help perpetuate growth, including wholesale and whitelabel capabilities for flower and tincture made from the Greenwood hemp flower collection. 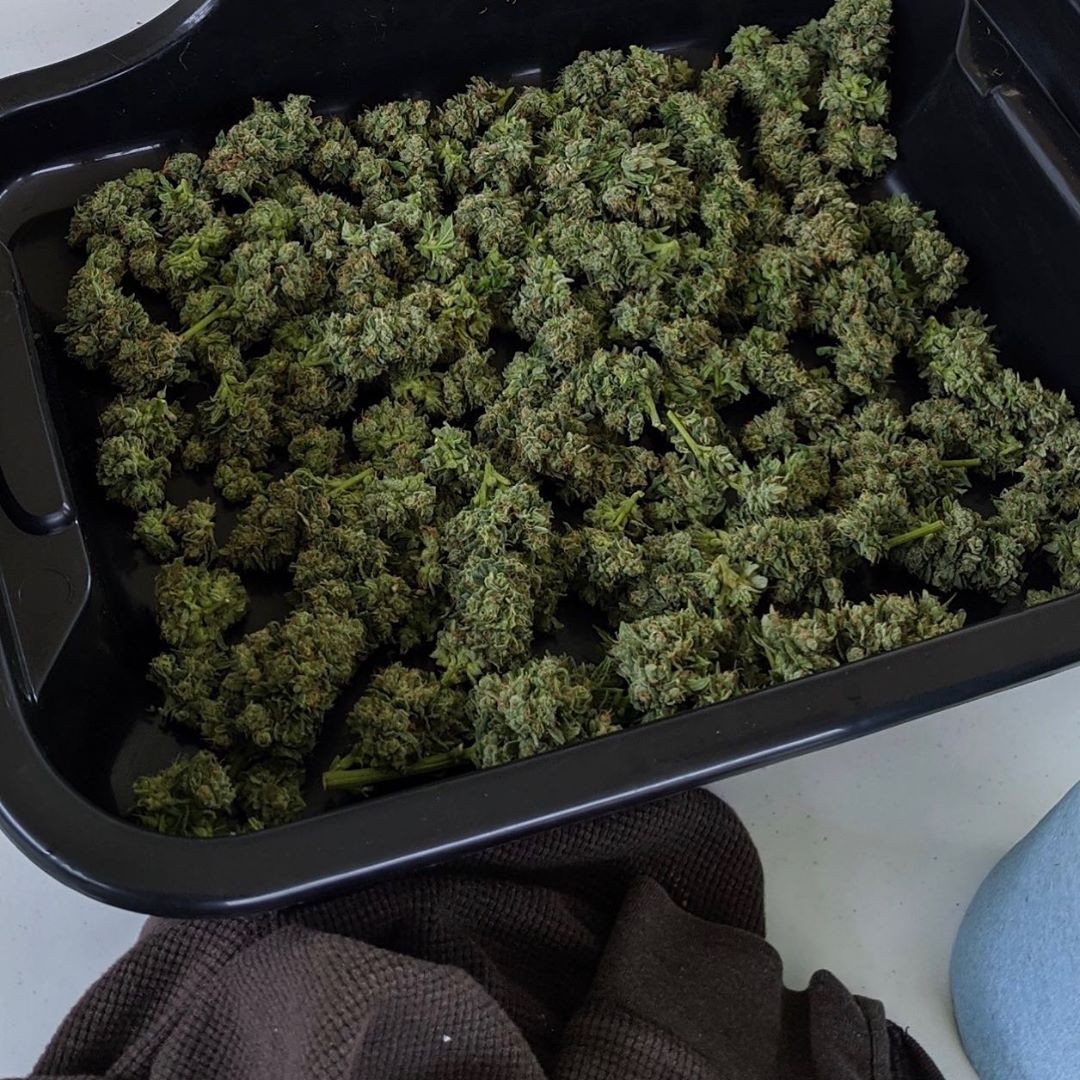 The Greenwood Collection is described as bold with citrus notes and natural terpene presence (no terpene infusions). It is a CBD hemp flower (no THC) that pays homage to the ancestral line of slaves sold in Greenwood, MS, as well as the Greenwood District of Black Wallstreet in Tulsa, Oklahoma.

The monstrous minds that permitted the selling of slaves and the senseless burning and bombing of black businesses and homes are defeated by determination that runs through the blood of black farmers, despite the industry odds constantly being stacked against them. There is still victory!

I imagine that makes for a smooth smoke and even more powerful spiritual encounter. Harvest season smells promising!

I can’t wait to experience Greenwood hemp. Stay tuned for a review on veetravelingcannavegmmagazine.com

Alan Hughey, Jarrel’s  youth baseball coach, used hemp to save his son’s life. He became a geneticist and applied the information to his own family and improved the quality of his son’s life. This further inspired Jarell to pursuit his hemp vision. 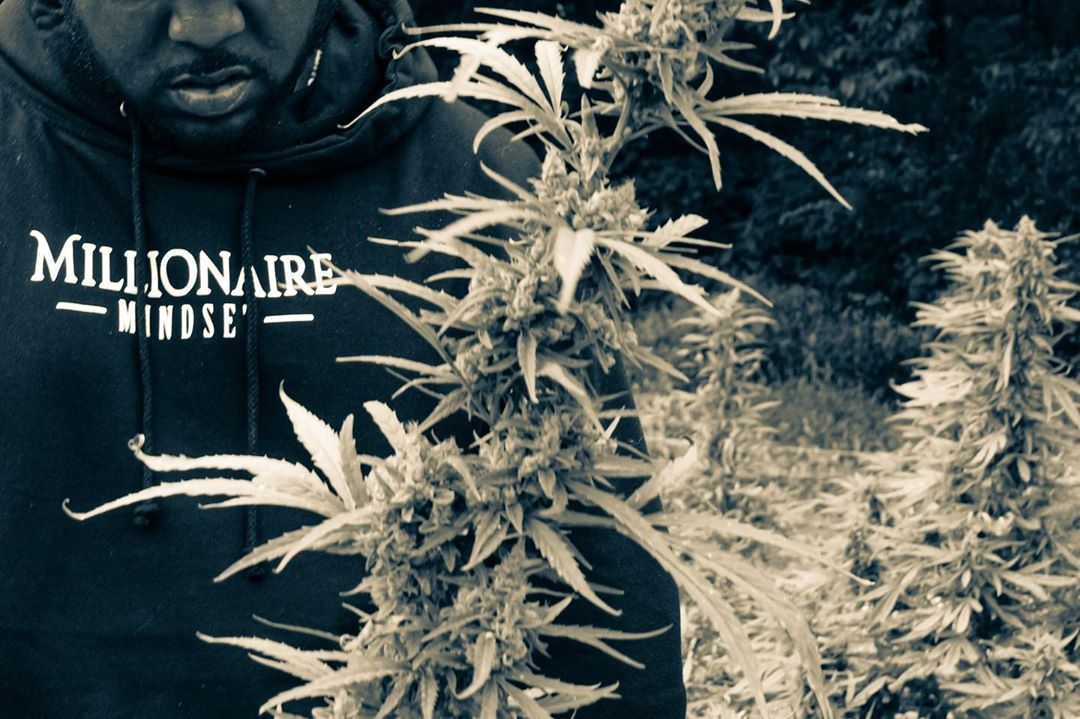 I am from the same generation as Jarrel Howard; a generation that sits on the cusp of the transformative digital age, ruled by hip hop. Unapologetic. We were raised by the generation that survived Jim Crow and then fell right into the war on drugs.

This age has been a strange darkness, a time of careful germination for a seed the next generation will illuminate. The work we put in together is the water. The crops will be like gold, returning the wealth and power to the hands of descendants who will finally see their rest. A golden age is coming and black hemp farming is in the front.

Written by: Dom, The Cannamom