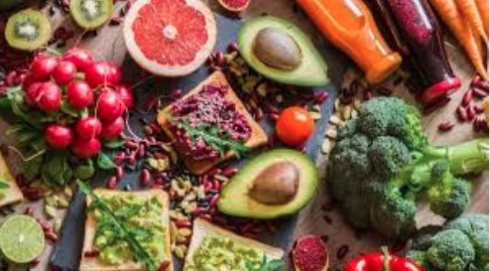 I write a lot about plant Cannabis, and my love for what she did for me, and I notice that I don’t show enough love to the other plants that helped save my life. Going vegan by way of diet, has changed my life so much, and for the better. I talk a lot about what Cannabis did for me: mind, body, and soul, but I fail to talk about veganism, and the growth that came from the transition.

Today, that changes because the truth has to be told. The truth is, my entire plant life has contributed to my growth, my healing, my becoming light so that I can spread love. When I started consuming Cannabis regularly, I was already practicing/ re-practicing consuming an animal free, mostly vegan diet.

My mind was already open because it led me to Cannabis. How? Because my mind was no longer believing what someone else had to say about a plant. I saw what plants were already doing for me, so my mind was open to Cannabis consumption. Well, that and because migraines were ruining me. I am diagnosed with Chronic Migraine w/ Vertigo.

At the time that I started consuming Cannabis regularly, a plant-based diet had already brought me to the rim of enlightenment. Cannabis walked me into that door. The two combined are the reason that I am the dope soul that I am today.

Okay- that doesn’t sound totally right. My experiences turned lesson, also play a huge role! So, let me try it this way; eating plants, made me open to all plants. Because of that, I said yes to Cannabis. Cannabis helped me see me and fix me. Combined, my plant on plant diet help me continue to explore and strengthen my dope soul.

When I made that transition- I did it cold turkey. It was like, that morning I ate bacon and by dinner- I was almost pescatarian. I said it once “I do not want to eat land animal anymore” and it has been years since doing it. Well- knowingly; eating out always has risks unless a no animal is in the kitchen at all.

I ate a sea animal diet for a while. But as I learned more, and evolved more, the more I didn’t want to eat fish. I couldn’t see their headless bodies on my plate without seeing them full of life prior to being “food”. This transition was a little harder because I was so in love with snapper.

This transition required baby steps. I let go of lobster and crab first, then, I let go of all of it. This sort of made eating out impossible because in the Midwest, in 2011, vegetarian was looked at with shock. It was like one thing to not eat beef and pork- many people let those things go. But it was different in a meat and potato region, to walk around proud of not eating any kind of animal.

To get here, those steps were tiny and slow. I decided in 2012 that I would transition to veganism because I realized that no heartbeat needed to stop just so I could eat. My journey to this point made me more and more compassionate. Many of us believe, and maybe there is some research out there that supports the theory that: humans become nicer when they stop eating animal and the animal’s fears, its illnesses, and the bad energy it took to get it to the plate.

By this time, I had lost a bunch of weight, cared about how my food got to my plate, and just wanted the cleanest diet possible. I cut out milk, then yogurt, then foods with diary in them, then cheese, then mayo. When I say slow, I mean slow- I cut one thing a month or so.

Those baby steps helped me though. I had to get comfortable with label reading, research, COOKING, and saying good bye to the social life that I knew. Which wasn’t much of one- I’m introverted with social anxiety so, don’t like socializing much. Being vegan definitely gave everyone the fuel they needed to solidify me as “crazy” in their worlds.

I Went Back to Fish

Stress used to always tear up my diet. Food was my everything- my happy, my sad, my stress, my love, my celebration- food was everything to me like it is for so many. Only, I didn’t know it until years later- like many. I got back here because cooking was the last thing that I wanted to do and so, I slipped back into convenience and that meant- eating out.

I should mention that a lot of my stress was my health. I was diagnosed with Chronic Migraine and my quality of life as suffering. There were days where opening my eyes to light was impossible.

During this time, Cannabis came to my life and came to stay. I was treating my condition and trying to find my way back to normal and so, that meant going back to vegan- cold turkey. This time I could do that because I had already been vegan. I also was able to do it just like that because, I gained back 30 of the 80 that I lost.

I also noticed that I wasn’t as kind and compassionate. Yes, I had the stress which can make just about anyone mean- but I was still sort of mean even after I dealt with and healed my stress. For me, I knew I had to go back transition to vegan again.

Cannabis Helped me Come Back to Right for Me- Vegan

Plants- because I saw their magic, they helped me say yes to plant Cannabis. For if not for the way that plants healed my body, I wouldn’t have believed in Cannabis so much. And through Cannabis, vegan Vee resurfaced.

Cannabis helped heal me from migraines and helped make me more aware, mindful, helped me see multiple perspectives, and helped me realize the significance of plants. Plants healed my body from weight, from pain, and improved my mental health. I had to come back to transition to vegan again, because it felt like I was consuming the mother plant and then feeding my body in not so honorable ways.

Veganism created the gateway of appreciation and acceptance of all plants. Cannabis helped me see that compassion is key, and that was the intention I wanted to operate from each and every day. Cannabis helped me see that I couldn’t move from a compassionate place, still eating animal. Together, veganism and Cannabis made me whole, more open minded, more aware, more accepting of all plants, and help me live a more compassionate life.